Our hotel on Friday night after the Balloon Festival in Château D’Oex was in Sâänen, which was only a ten minute drive from Gstaad.

Although we were planning to ski in Verbier the next day, we were very excited that we were staying near Gstaad as we have heard the skiing was amazing…so naturally, we thought the nightlife would be as well.

We did not do any research on this subject prior to coming. First mistake.

Gabe attempted to look for “Best Bar in Gstaad” on our walk into the charming town. Funny that only one bar entitled “Richi’s Pub” came up. Silly iPhone, not working properly. So we thought.

And these were the views on the streets at 10pm in Gstaad on a Friday night:

The only action we saw were some local guys practicing on the hockey rink: 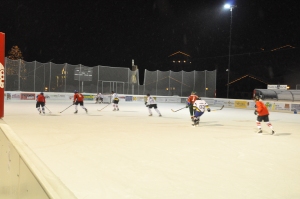 We did end up finding Richi’s….the only bar in town, and stayed for one drink because we had made the effort. Such an adorable town, but so boring at night! There was not a soul to be found out in the night air.

We were later told that Gstaad is the playground of the rich and famous and that they don’t go out.

In writing this post, I Googled “Gstaad nightlife” to see if we were missing out on anything, and the top mention was this site. I noted it gets updated once a year.

So, if you are looking to get away to a quiet destination without any disturbances or things to do at night, we wholeheartedly recommend this town. For a glimpse of a pulse, we would recommend Zermatt or Verbier (check out tomorrow’s post!).

One thought on “Gstaad: Home of the Rich and Famous…and Dreadfully Boring”