When The Captain and Swiss Miss were visiting, we took the Glacier Express. No, this isn’t the train to Santa’s house….it goes to St. Moritz. Which is sort of like the North Pole, if you think about it, full of wonder, make-believe and furry suits.

The Glacier express is a very nice excursion to do if you are visiting a short time, since it covers a large part of the country of Switzerland. It travels the path in red, below. 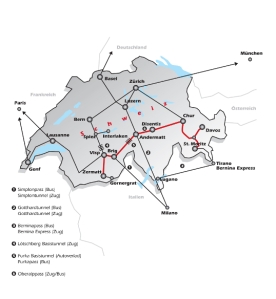 In its entirety, The Glacier express travels through 91 tunnels and 291 bridges. At altitudes of up to 6500 feet, it cuts through breathtaking mountain passes, glaciers, and by rushing mountain streams. From its windows you can experience a part of nature that has remained untouched. In fact, there is a certain part of the railway that has a UNESCO designation as a World Heritage Site, the Rhaetian Railway from Thusis towards Bergun. This was given due to its role in developing access to remote areas in the Swiss Alps as well as how the civil engineering blends seamlessly with the nature surrounding it. 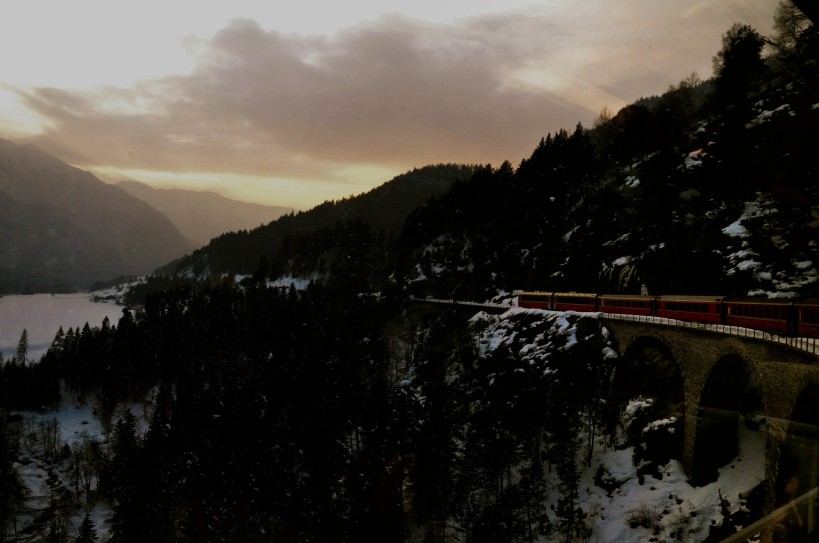 The Glacier Express started in 1930, a remarkable feat considering the economic crisis that was happening during that time. It experienced a slow down as well in WW2 as it didn’t run between 1943 and 1946, during the war.

Up until 1982, it could only run during the summer months because the Oberalpass became impassable in winter with snow. In the 1980s, they made improvements in tunnels, allowing it to operate. Since that time, they have upgraded the cars to be equipped with panoramic windows* for tourist’s photo taking and comfort.

One of the many tunnels the Glacier Express travels through

While the Glacier Express isn’t really an express at all (average speed is 20 km/hour), I appreciated the extra time it took to get to our destination due to the beauty of the landscape it traversed.

We would recommend this to those visiting Switzerland. We also hope to check out some of the other scenic trains such as the Golden Pass, or Bernina Express during our time here. 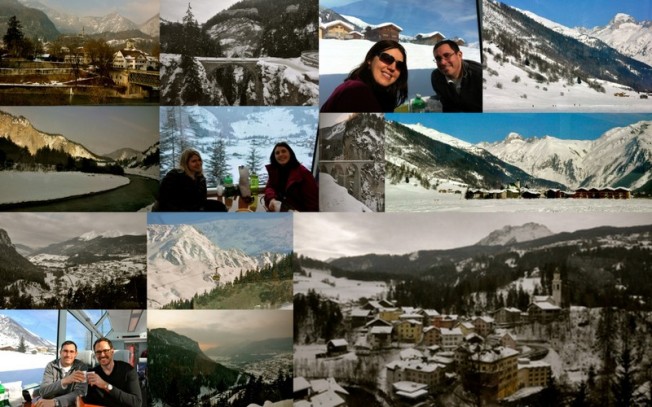 What you should know :
–If you are interested in taking a scenic train, Rick Steves has some great descriptions about the differences on his site.
–If you are visiting, you can take the scenic trains on a Swiss pass or Swiss Flexi pass. Same goes for residents with a day card. For the Glacier express, you must get a reservation for 13 CHF in the winter or 33 CHF in the summer for a seat.
–They serve great meals on the Glacier Express; however picnics are also allowed. We brought an assortment as well as two bottles of wine.

*The large windows created a magnificent view. We were blessed with a lot of sunshine on our journey which was great for us, but made our photos a little worse because of the glare. Sorry.

3 thoughts on “All Aboard the Glacier Express!”