Recently, I was fortunate enough to get into a tour at CERN. CERN is located in Geneva, but its underground facilities span both in Switzerland and neighboring France. CERN stands for Conseil European pour la Recherche Nucleaire but also is known as the European Lab for Particle Physics.

It was founded in 1954 by 12 countries (now 20 are members) to determine the origin and structure of the universe. You may remember it from the scene from Angels and Demons when the antimatter was stolen.

I am relieved to find out that this scene is not based on fact. You can’t use antimatter for energy like this, and it can’t be captured and “stolen”. Good to know. Especially because it under us right now. Like literally. They are trying to recreate the Big Bang underneath where our apartment lies so they can understand more about the Universe. 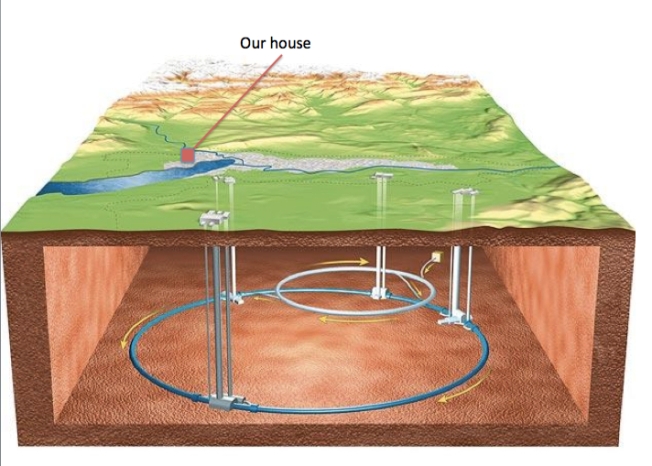 As you can see, a 27 km pipe runs 100 m underground, creating a vacuum comparable to outer space. The particles are whizzing beneath us within the ring 11,000 times a second into France and then Switzerland.

Basically, they accelerate and create head-on collisions for the particles to try to detect and look for “The Higgs Particle” sometimes called “The God Particle.” Each beam has around 3000 bunches of particles, with an average of 100 billion particles in each bunch. Even with those numbers, there is typically on 20 collisions among 200 billion particles. The machine generates. However, there are so many that they can only keep the most interesting ones. So they filter for that and store only the most interesting data.

They have about 100,000 computers in a networks (called computer farms) to analyze the interactions. Only 10,000 or so are here in Geneva  and the rest are in labs all over the world. They use a web network to share and confirm the data transmissions. 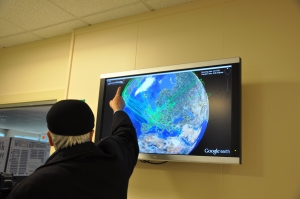 You can see in real time how this data is coming in from all over. In fact, the World Wide Web was actually invented at CERN in order for scientists to share their data & experiments. Interesting!

Someone is watching the data and systems 24/7. Mostly it is a team of scientists in Europe. But they said that the folks in the USA take the night shift, so its being monitored and controlled by a lab in Chicago.

They used to let people underground up until when construction was finished 3 years ago. Thus, I didn’t get to go underground, but did get to see the former version that they still use in conjunction with the new systems.

However, I did get to see the spot where antimatter was first discovered!

The CERN guy joked that while the main building is in Geneva, since their facilities spans the border, they actually tap into French electricity. They are using 7 trillion volts of electricity to make this happen and in France it is a lot cheaper. Just like my groceries.

For another take on the tour, check out my new friend’s blog, The Adventures of Miss Widget and Her People.