With my feet out of commission, I had been brainstorming ways to show our most recent guests around Geneva.

Luckily there are three tourist trains in Geneva – one that goes to Old Town, Left Bank, and Right bank.   The Left Bank train became my friend last summer when I didn’t know anyone.  It spoke English and was comforting to hear it pass now and then as I was sitting on the lake front.  Good thing I made friends and didn’t have to the rely on forms of transportation for my social life.

Anyhow, on the day that our crew of 5 arrived from the States, we took the Old Town Train.  This particular one starts at Place du Fusterie and winds around the middle of town for 35 minutes.  It costs 10 francs and passes by the following stops:

The Statue of General Dufour 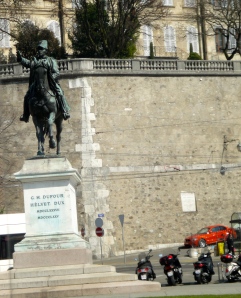 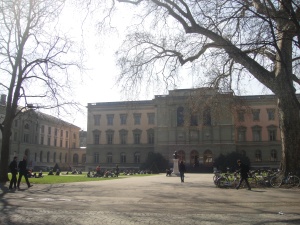 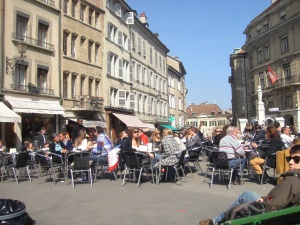 I would rate this train a 5 on a scale of 1 – 10.   It was hard to hear the announcements – they were muffled by the street noise.  Also, the website conflicted with the times that were posted at the entry point causing some confusion.   But for my current condition, a moving vehicle that took us by some Geneva highlights** so that I could fill in commentary was a great thing for us.  If you do have guests or if you are visiting Geneva yourself, email the company for confirmation when and where it will pick up the day you plan to take it.

*I have a friend who lives in Old Town. She detests the Old Town train because of the noise it makes passing her window.  I kind of felt guilty taking it but at least we were going in the middle of the day.

**Our guests asked the baggage guy in the airport what there was to do in Geneva.  He gave them a blank stare and said they’d come to the wrong place for activities.  He did mention Old Town was one thing that they should check out.  Good, glad we had this on the itinerary.