You might remember that we visited Zermatt before, but failed at catching a glimpse of the Matterhorn.

So when Gabe’s family put this iconic  mountain on the top of their Swiss wish list, we were excited at the thought we might actually get to see it.

We stayed in nearby Tasch, the town where we had parked the car on our last visit.  Tasch has trains to Zermatt every 20 minutes, providing a less expensive hotel option (150 CHF vs. an average of 500 CHF ) since it was still skiing high season in Zermatt.

After dropping bags at adorable Hotel City in Tasch, we headed to Zermatt and immediately took an electric taxi  to the best overlook.  It was quite bright, but still magnificent. 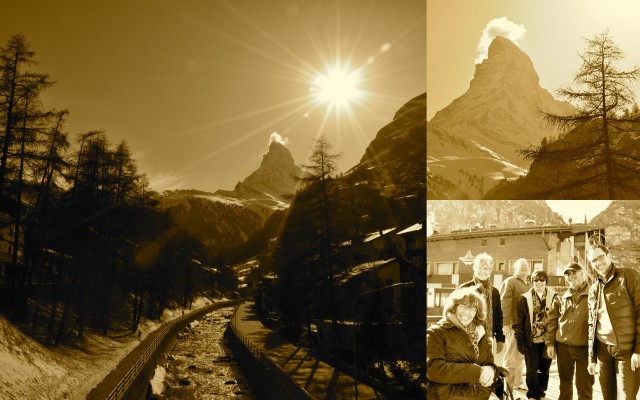 Zermatt is known as a climbers destination although the Matterhorn is one of the deadliest peaks in the Alps.  It was one of the last peaks to be climbed in the golden age of Alpinism, and was first conquered by a group lead by  Edward Whymper in 1865.  Unfortunately, on the descent, there was a fall and four members of the group fell to their deaths.

We passed the graveyard for those who have died attempting to climb the Matterhorn.  It has been about 500 people in total who found their match in the 4,478 m high peak. For more information on this topic, Schwingen in Switzerland did a comprehensive post. 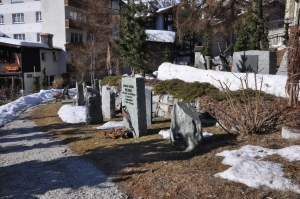 After wandering the town a bit, we dined on burgers and beers at Zermatt favorite, Brown Cow at Hotel Post, and then headed back to our own hotel in Tasch for the evening.

The next morning, we got up bright and early to make sure we were on time for the Glacier Express. We had an extra half hour to kill, so a few of us ventured back to catch a morning glimpse of the majestic Matterhorn.  Much better by morning:

Zermatt still remains one of our favorite Swiss towns.  We have visited it now in winter and spring.  However, I think it would be beautiful in the summer and fall as well.