Italy was high on the list for the family to see while they were here.   We considered going to Venice but our schedule was already packed as it was.  With Venice being 7 hours on the train, we opted for going to Milan instead as it is only 4 hours from Geneva.  We thought 14 hours would be overkill, especially since we’d done about 20 hours on the train thus far into the trip.

Direct trains leave Geneva twice a day for Milan – 7:42am and 1:42pm.  We picked the early train so that we could maximize our time.

We arrived in Milan just around lunch time and started to figure out how to take the metro and get euros out for the group.  We spent about 2 hours in the Milan train station trying to navigate.  Hello Italy and chaos!  As it turned out, we couldn’t take the metro with the wheelchairs – only steep stairs provided access – so we hopped in two cabs to take us to the city centre.

It took us a little while to find our hotel, but when we did find it we were rewarded greatly.  Gabe had done the research and found apartments nearby the Duomo.  Little did we realize that the view would be this good: 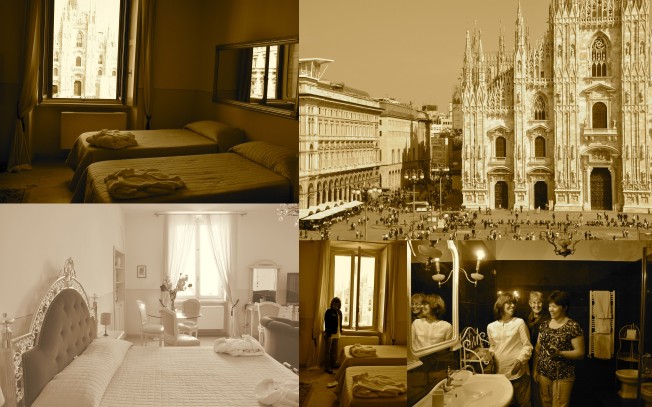 After marveling over the stately bathrooms and a quick lesson on bidets (see S in S for more), we dropped our bags and headed out for lunch.  We found a nice café directly in front of the Duomo and settled in for some wine and pizza. 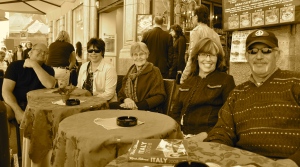 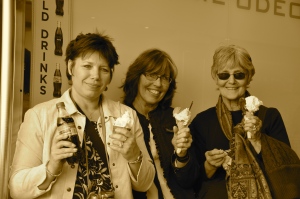 The Gladiator's favorite part about Italy 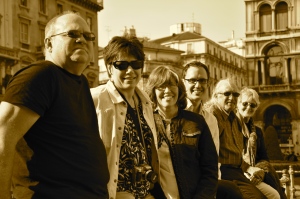 Hanging out in Piazza del Duomo

After lunch, we grabbed some gelato, and Gabe took Sweet Wine, The Gladiator and French Cougar to the tour office to see if we could arrange something for the next day.  We had another small snippet of Italian chaos when some guy passing by stole The Gladiators sunglasses that he had left on the grass.   Mama Mia and I really couldn’t chase him down in our wheelchairs, so Dunkel saved the day by chasing after the guy who gave them back.

After a little bit of free time exploring, we met up for walking to a close-by restaurant, Al Mercante, recommended by a few folks.  It was family owned, cozy and welcoming.  We ordered in the typical Italian way, with a primi and a secondi.  In Italy, this is customary – to start with a pasta and then move onto a meat or fish dish.  Real Italians also add on an antipasti prior, but our tummies weren’t conditioned to this treatment yet so we just left it with the two courses.   However, some of us did participate in dolci, dessert.  Special thanks to Sweet Wine for treating Gabe and I to this marvelous meal.

The next day, after breakfast, we took a guided tour.  The guide, Esther, was quite good.  We’d recommend her for anyone traveling to Milan.  We navigated through the thousands of soccer fans in Milan for the Milano vs. Barcelona match happening later that night.

Our first stop was the Duomo.  We learned that it took 500 years to complete, constructed between 1300 and 1800 AD.  The Duomo of Milan  is the world’s 3rd largest church (behind the Vatican and Sevilla).

Waiting to enter the Duomo of Milan after learning that "an Italian 5 minutes" really means 15. Not very Swiss.

There are 91 masses a week.  However, no weddings or funerals with the exception of very important events.  Versace’s funeral took place here in the Duomo of Milan.

The marble used inside and out came from Lake Maggiore, outside of Milan.  Back then, it was quite important that it was a local source because of the difficulties of transportation.  As I mentioned, the marble used outside is the same as inside.  However, inside, the marble is dark.  Because of the current economic crisis in Italy, they cannot afford the expense of cleaning it inside.

After learning about the marble, we studied the stained glass.   Esther taught us that before the Catholics who attended the Duomo could read & write, that stained class told stories of the bible.  This particular scene details the life of Jesus Christ.

Some arts don’t improve with technology.  Esther said that today, designers are still not able to recreate the blue color that the talented craftsman achieved in the 15th Century. 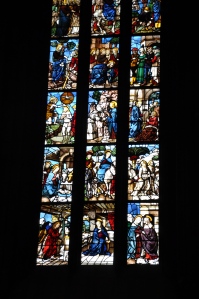 Stained glass in Duomo of Milan, circa 1450 AD, telling the story of Jesus Christ's life.

After the Duomo, we continued on through the Galleria, the “living room of Milan”.  Gabe and I had discovered it the day before so enjoyed the second look.  We saw the original Prada, which will celebrate 100 years next year.  Speaking of the devil, our guide had the pleasure of touring Meryl Streep herself when she visited Milan. She said she was a very nice person. 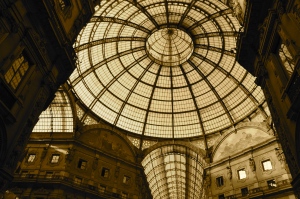 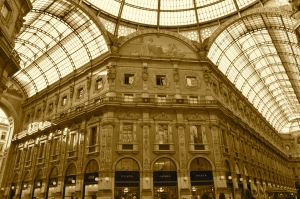 Next was La Scala, the famous opera house in Milan.  It was finished in 1778.  Esther listed three reasons it was so famous:

-the history, particularly Giuseppe Verdi, the talented composer who put the crack-down on the social antics of the Milan well-to-do when attending the opera

The final stop was The Last Supper.   This was my favorite stop.  Until recently, I didn’t know that The Last Supper was painted on an actual wall.  It was done in the dining room of the monks in the Convent of Santa Maria delle Grazie, in a style like a fresco.  During WWII, the church was bombed and the adjacent wall crumbled and so The Last Supper barely escaped.  It is now a UNESCO world heritage site.

They are very protective of the painting, with due cause, so we had to go through three independent air-conditioning chambers before we were let in the dining room.

It was simply amazing to witness Da Vinci’s perspective compared to the other art that day. If you stand back in the dining hall of the monks, the scene seems to go on endlessly.  Noticing the other painting opposite the room, which was painted during the same time, the perspective and depth simply wasn’t there.  It was a new concept which made Da Vinci stand out as an artist.

Also of note is Da Vinci’s use of emotion in The Last Supper.  Previous artists had used the same faces for all of the apostles.  In order to differentiate Judas, they put him farthest away from Jesus.

However, in his rendition, Da Vinci focused on the emotion of the men at the moment when Jesus announced that one of those at the table was going to betray him. Disciples are grouped in threes for further examination, each with different reactions.  Judas is now depicted in the middle of all of them, fairly close to Jesus; however, he is in the dark, not the light.

What a treat, especially a week before Maudy Thursday to experience this painting.