On E-dawg’s second day we had pegged the Palais des Nations as a possible stop for the rainy Monday.  It was a good choice because, by default, it was literally the only museum open on Monday.   Also E-dawg had it on her Geneva “must visit” list.

She had read there was a lot of walking and warned me but I decided I was up for it – couldn’t be more than a km or so. We took the bus to Nations.   This was our first mistake.  Or my first mistake.  I just assumed that tourist rolled right through the colorful flags into the Palais des Nations to enter. 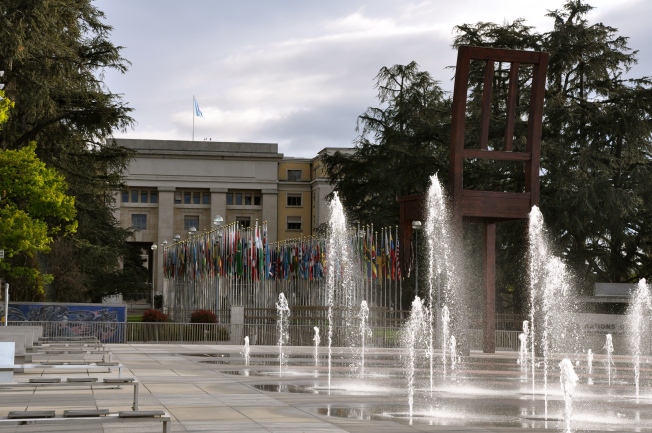 The grande entrance to the Palais des Nations. This is the oldest building and is bigger than the Palace of Versailles.

However, the actual tour entrance is was a 1 km walk away from the grande entrance.  This detail would not have been very important to the old me.  However, it is very important to the present-day me with healing feet.    Thus, I wanted to show those readers who might be a little walking challenged where the entrance is.  The #8 bus, Appia stop, gets you considerably closer.   It’s important to conserve energy as this tour does include a lot of walking.

They are very protective of the safety of UN workers.  Rightfully so, since 3000 have died in operations or just by being in UN offices in times of terror.   So, checking in for the tour required multiple steps.  First, you go through an airport-style metal detector.  Then, you approach a desk to register by showing your passport for scanning, getting a new picture taken, and  that photo being printed into a picture badge.

Next you go down an escalator, pay 12 CHF, and walk a distance to the entrance and gathering group of the tours.   You approach the desk, give your language preference and wait.  Then you get a bright orange lanyard indicating you are a tourist so that you can be easily spotted.

We were very lucky to have an amazing tour guide.    We started the tour by seeing some of the conference rooms.   There are over 9000 meetings a year so they need a lot of conference rooms.

We learned that in the traditional rooms, the member states sit in alphabetic order.  Then comes the observer non-member states  (like Palestine, Vatican City), then the NGOs that provide the link between civil society and UN.  Then approved media.

The UN has six official languages – English, Arabic, French, Mandarin, Spanish and Russian.    If you want to address the UN in a non official language, you have to bring your own translator.

Human issues conference room. The ceiling was done by a Spanish artist and was donated by the country of Spain. His intention was for the textured color to peak like waves of ocean. The color represents the diversity of opinions in the world. The art was unveiled and conference room reopened in April 2009. The current issues in Syria are discussed here. 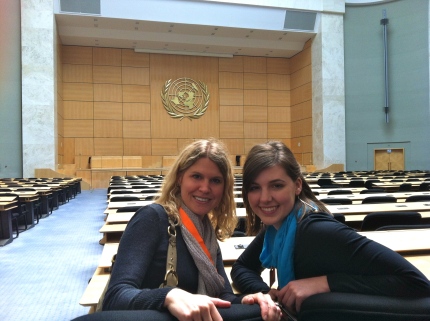 E-dawg and I in the grand assembly room in the Palais des Nations. The UN logo is different in this room, with the globe view from the top, showing no country is in the middle at the UN.

Original council room of the League of Nations. The League of Nations was formed after WWI. However, they failed at preventing WW2 so it disbanded. Mr. Pettyjohn would be proud I was seeing this place as we learned a lot about it in Freshman History. Now this room serves as the council of disarmement, preventing nuclear and chemical means of warfare.

Some fast facts about the UN:

-The UN is decorated with art from all over the world, to represent its diversity among member states.    In a grand entrance, there are colored marble in different designs.  Our guide pointed out that the marble comes from 3-4 different countries to show integration and how great works are possible with collaboration.  Pretty cool. 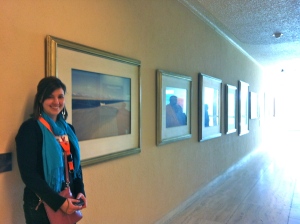 The Russians donated the Conquest of Space and Time statue - made out of titanium like space shuttles. Sorry, its the tiny thing in the distance - I took all these photos with my iPhone.

Trees are donated from all over the world to adorn the park, creating diversity in landscape

What is the difference in Geneva and NYC?

The chair with the missing leg was donated by Handicapped, Intl to represent the lives and limbs lost by unnecessary land mines

The WHO (world health organization) is one of the bigger departments here in Geneva.  Also, UNHCR – the high commission for refugees, which helps 20 million people a year!

Why did they pick Geneva?

NGO, The Red Cross was already there (1863) and it had been proven to be a good place for a headquarters.  Plus,  Switzerland was a neutral country making it additionally easier to facilitate an organization such as the UN.   Third, Geneva was known as a very diverse city which helped exemplify what the UN’s goals are.  Finally, geography – Geneva is in the center of Europe and is accessible by train and airport. 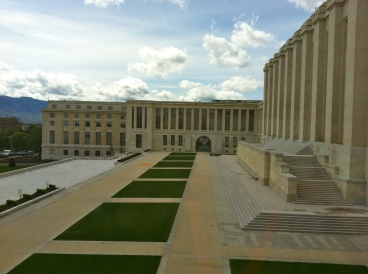 The views aren't bad here either.

Currently, there are 8500 employees in Geneva, but 25,000 delegates participating here each year.    Building on that, 163 of the 193 member states have permanent missions in Geneva.   I know a few women at the women’s club whose husbands work for the missions so this fact a was interesting.