We have just returned from a lovely trip to Provence.   Don’t tell Italy but the South of France is quickly climbing up my all-time favorites list.    As you recall, we traveled to Provence & Cote d’Azur back in April with Gabe’s parents.   However, this time, it was one of our honey funds – a long weekend “honeymoon” that people had given us for our wedding present.

Little did we know that the weekend we selected was actually a French holiday.  Saturday, July 14th was Bastille Day.   This ended up being a plus as we got to experience another culture’s way of celebration.  What’s not to love about that?

We arrived into Saint-Rémy-de-Provence around 9:45pm after a four hour drive from Geneva.  Gabe unfortunately had to work a little bit when we got there but I occupied myself with exploring the grounds of our lovely little B & B, La Maison de Françoise.

Around 11:00, we headed into the town square to grab a drink and check out the nightlife.

The city was quite romantic at night

We passed a view nice cafés, but decided to continue to walk along  to get our bearings with the size  & layout of the town.    It became easy to select which way to go as we heard music playing.  We eagerly walked towards it to find out what was happening.

We noticed some barricades between where the music was and where we had approached the square.   Hmmm.   Some people were even sitting on the side of the barricades.   Perhaps a parade had just happened?    Some people walked through them so we followed, squeezing through the gaps. 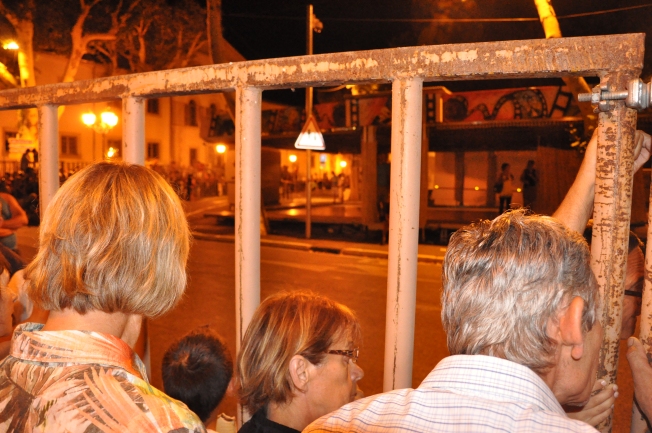 Hmm. What are the bars for?

A lively band was playing fun music in the square.    It was fun to watch the expressions as they created the melodies for all the townspeople. They were certainly very much into their performance and delighting the crowd. 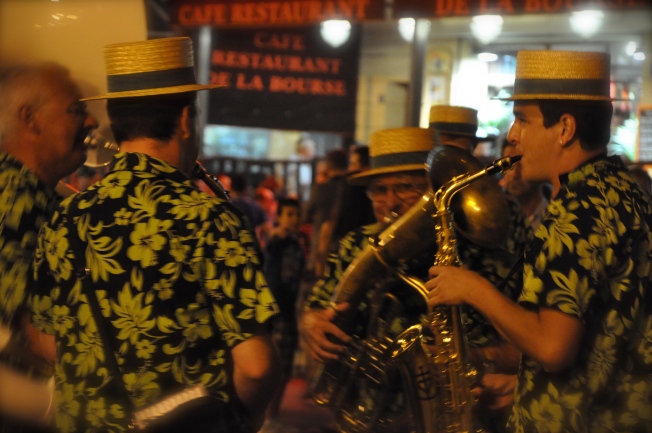 The band was a fun surprise.

After listening to the music, I noticed that the streets had cleared a bit.   A loudspeaker announced something in French that I interpreted as “stand back”.   Gabe laughed at me and said I was being silly but I pointed to everyone who was lined up behind bars.   We only saw a few teenage guys lingering in the streets.  Maybe troublemakers?

We moved back behind bars and then I noticed this sign:

I was excited.  I had always wanted to see the running of the bulls!!   I was imagining the scenes I’d seen from Spanish photographs of bulls stampeding around the streets and people running.

Sure enough, they came over the loudspeaker again (this time I was able to translate better) and announced that everyone should get behind bars.  The few teenage guys continued to stand in the street, looking macho.

The same band, whom had ascended into a conveniently located flat-bad truck, continued their music, safely out of range.  Revelers strategically selected their photo positions.   And, Moms put their pack-n-plays on the roofs of concession stands:

We awaited the appearance of the bull… 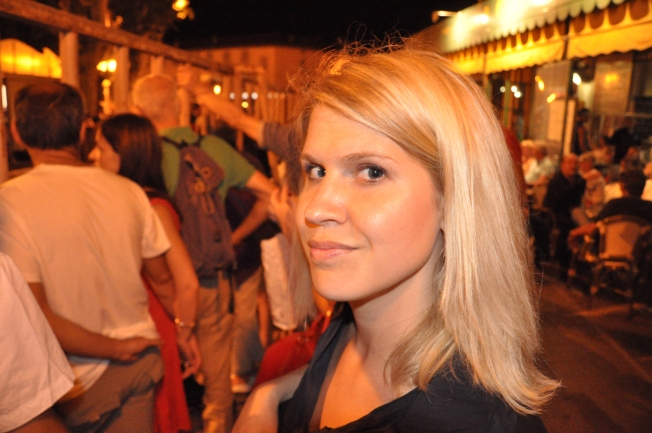 Gabe says I don’t look pleased in this photo. I was just ready for the bulls…

He ran around town while the guys taunted him.   We kept waiting for more to be released and something else to occur, but it never happened.

This will go down as the day we saw the running of the bull.  Singular.

For the video, check out:

We loved La Maison de Francoise, our little B & B.   More to come on the blog about this lovely little estate.

The parade on Bastille Day was quite cute.  Check out tomorrow’s post for more.

3 thoughts on “St. Rémy and the Running of the Bull”