The Minoan civilization was just a myth until the last century when Sir Arthur Evans , a British archeologist, was able to pursue his intuition and dig after the Turks departure from Crete.  Before that, he was not able to dig due to the conflict.

And he found what he was looking for – traces of the ancient Minoan civilization which flourished in Crete from 2500 BC to about 1500 BC. This civilization was the oldest  in Europe, happening during the Bronze Age.   For a reference point, it thrived in the same era as the Egyptian times and the Ancient city of Babylon.

The first settlement on top of a previously Neolithic village occurred around 2500 BC – time of King Minos.   They flourished, but were completely iradicated around 1700 BC – possibly by earthquake or the Santorini volcano which is likely to have caused tsunami effects.   During this early time, they were far advanced, producing:

-the first flushing toilet.  Our guide pointed out that even the Palace of Versailles didn’t have such technology 2000 years later. 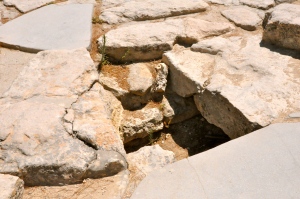 Evidence of the Minoan engineering – a top channel for regular water, underneath was a channel for waste water from the toilets (not visible in photo)

-the first draining bathtub in the queen’s quarters. 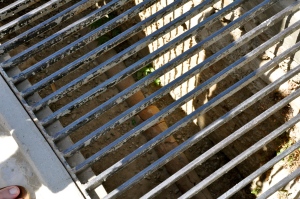 -the first throne.  The original is pictured in the below photograph.  A replica sits in The Hague at the International Court as a reminder of the power of justice vs. war (the Minoans were peaceful). 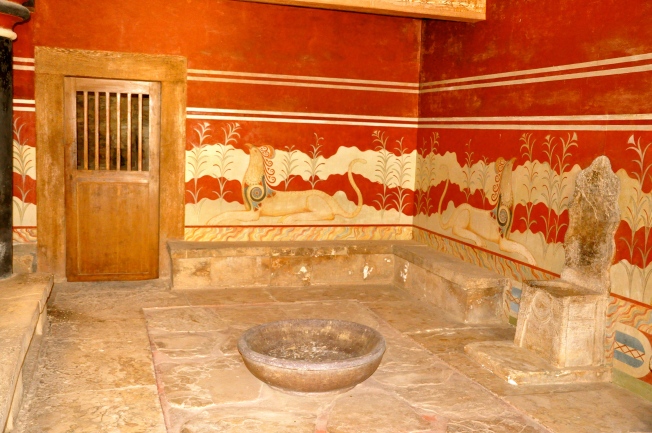 -the oldest road in Europe

The labyrinth of the Palace of Knossos

A few myths related to the Palace of Knossos & Minotaur occurred here.  You may remember them?

–Father and son  Icarus  were traped in the maze of the labyrinth at Knossos.  Finally, they came up with the idea to use wax and feathers to make wings to fly out of their captivity.  The father Daedalus warned Icarus not to fly too high, but being young and foolish, he did, the wax melted by the heat of the sun and he drowned in the sea, now named The Icarian Sea.

–King Aegeus  was fed up with King Minos sacrificing 14 young Greek boys and girls each year to the Minotaur.   His son Theseus agreed he would go with the troop and kill the beast, changing the sails from black to white to signal his success.   He succeeded with the aid of the King’s daughter Ariadne using string to help him find his way.  However, in his rush to return to Sounio, he forgot to change the sails.   His father jumped into the sea in mourning, thus naming it the Aegean sea. 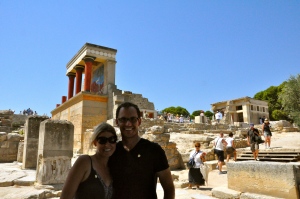 Lucky we didn’t get stuck in the labyrinth!

Other than it’s tie-in to Greek mythology, we found the original 4000 year old urns to be quite impressive – they were made to hold olive oil, honey, and wine.  They were extremely heavy, requiring many lifters and handles.   It is said that the son of King Minos was curious and climbed into the honey urn and accidentally fell in.  He met his death by the bees that swarmed the urn.  What a way to die! 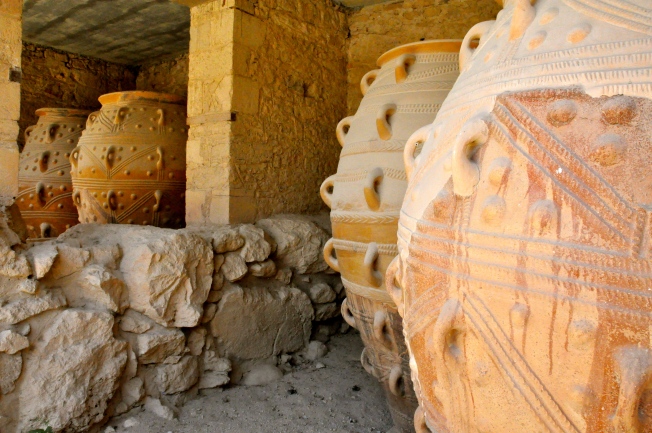 Also, I really loved the frescoes.   Throughout the archeological site, they had imitations so you could get an idea what the palace looked like.  We later toured the archeological museum which contained the smaller and most precious artifacts found at the site.   My favorite fresco was the one that depicted the acrobats flying over the bulls for entertainment.   Bulls were sacred (unlike Spain and Mexico where they slaughter the bulls), so the acrobats had to be very talented to grab the horns and flip over, with no harm to the bull.

Fresco of the bull dancers