As I mentioned in the last post, we have become fans of the wine of Italy’s Piedmont region.   However, while we knew the most famous types – Barolo, Barbaresco, and Barbera – we did not know the slightest about the vinoculture.

So, to develop our knowledge on Piedmont wine, we had no choice but to travel there and have an official Piedmont wine tour!

To start, all three of these are grown in the Langhe region of Italy.   This is an area within the Piedmont.   Italian wine isn’t as complicated as French with Grand Cru, Premier Cru, and village level designations.  However, they do have a similarity in that certain plots are valued more.  However, these are more ‘small areas’ than particular plots belonging only to one winery.     While France uses AOC to designate the its approval of the grape / area, Italy uses the term DOC.

The Langhe region is very hilly.

Of the three I mentioned above, in addition to being types of wine made with Nebbiolo grapes, Barolo and Barbaresco are also towns.   There is no town of Barbera, but the Barbera grapes grow in the Piedmont and come from different towns…Barbera d’Alba, Barbera d’Asti, etc.

Barolo is the king – the best.   There are eleven towns in the Langhe which can call their wine Barolo.   Building on that, there are many crus, or plots of land where these special Nebbiolo grapes come from.    At our first stop, Fratelli Revello, we tasted their Barolo 2008, Barolo Vigna Gattera 2007, Barolo Vigna Giachini 2007 and Barola Vigna Concha 2007.   The names Gattera, Giachini and Concha are the plots.  They pointed out their window to show us where they came from – to the south, to the southeast, and across the street.  Thus, Barolos are not blended.

Checking out the Barolo map while overlooking the beautiful vineyards

While visiting the Marchesi di Barolo winery, we learned a bit more about Barolo’s history and the influence of the Savoy, who made their capital in nearby Torino.  This was very influential in the growth of Barolo.

As I mentioned, Barolo is a town.  And it is quite lovely….it is located in the middle of the hills, complete with a charming castle.

If you don’t have a planned visit, there are countless local wine stores in the town of Barolo with signs that invite strollers to come have a tasting.  We abstained due to the heavy amounts we were tasting at our visits, but did buy some local goods – hazelnut creme, pasta, and a handmade wine opener.

Exploring the town of Barolo, Italy 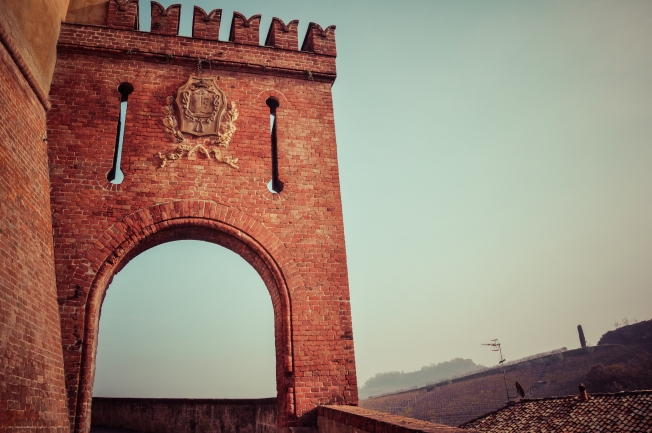 Barbaresco is a town and also a type of Piedmont wine made with the Nebbiolo grape.   Exactly like Barolo, Barbaresco has only certain plots within the DOC.   There are only five compared to Barolo’s eleven.    We visited a charming family winery, Ca’del Baio.  In addition to their flagship Barbaresco, this winery also produced a few other local grape varieties: Dolcetto, Barbera d’Alba, and a Nebbiolo without DOC designation (outside the borders).

The hubby, checking out the family’s photo collection.

Barbaresco town is beautiful yet still much smaller than Barolo.   It is situated on the top of one of Piedmont’s rolling hills. 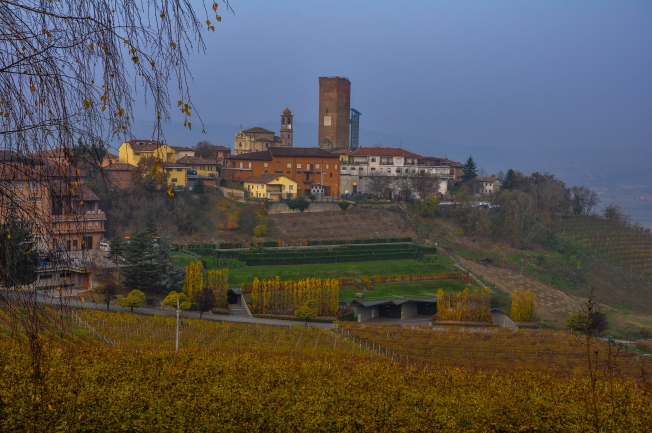 Town of Barbaresco, as seen from a neighboring hill

Like Barolo, you can taste in the many tasting rooms of Barbaresco.  Our guide told us about one tasting room that is a converted church.  We didn’t visit the Sunday morning we were there, but you can see it in the below photo as the central building.  Barbaresco also has a charming Sunday market. 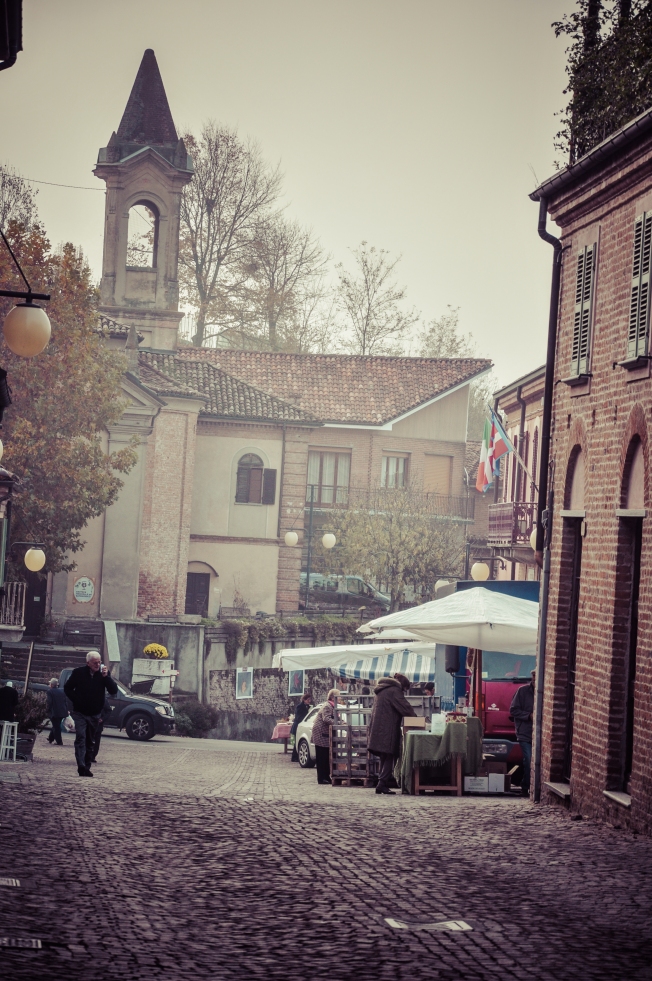 Sunday morning market in Barbaresco. We purchased some nocciola creme and olive oil.

Finally, an explanation on Barbera.   As mentioned above, Barbera is the name of a grape, not a town.    So, it came come from different areas, generally designated on the label. 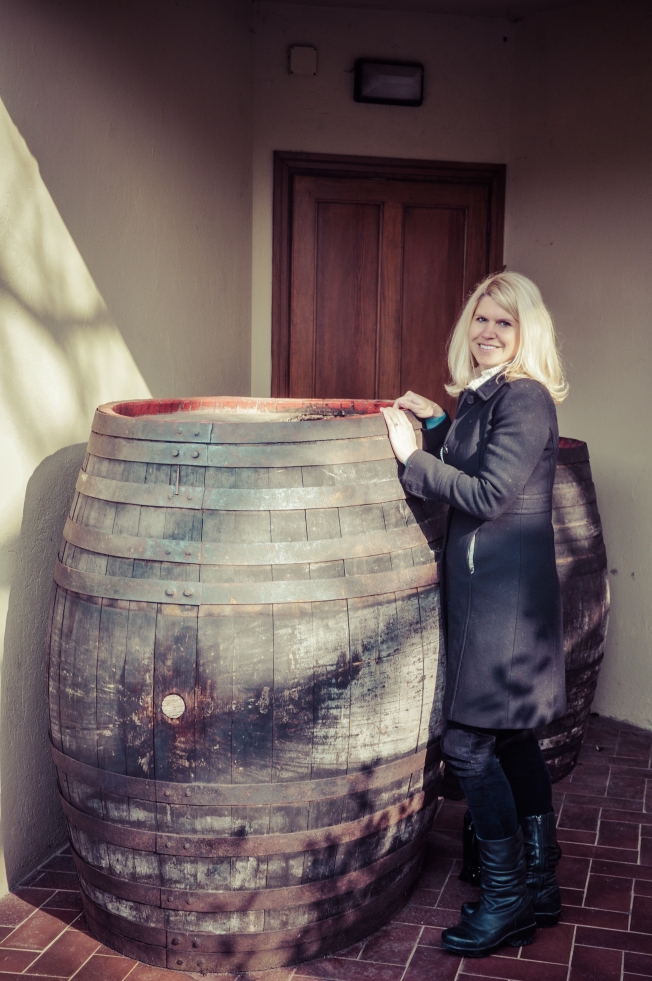 While I like Barolos and Barbarescos, my wallet keeps me a bigger fan of Barbera.