We have had an opportunity to visit many airports across the world.  Sometimes we are surprised with how different things are! 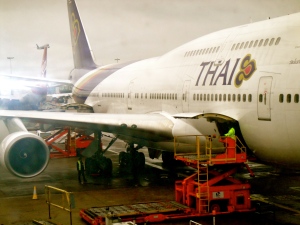 Boarding a Thai Air flight to Bangkok in London

Some differences in Europe:

Which continent is best for connections?

We advised our parents to connect in the US when they came to visit us in Europe.   The pros to this advice are that the airports are usually laid out in a way that makes sense to them, as well as they can ask in English comfortably if they are confused.

Contrary, European connections are a little more difficult to navigate.  You have to go through immigration and out to the public area of the airport which requires you to go back through security.  This can be confusing to some who aren’t used to it.   The bus factor above can add stress to connections because you have to board a bus to get to the terminal and board a bus to get to your next plane.

You also want to think about where you’d rather be stuck.   We generally like to take the longer flight first.  Thus, if you are late, you are at least on the same continent you are supposed to be on, rather than getting stuck another day for the next International flight.

I love IAD / Washington Dulles.  There is a direct flight from Geneva so it is my favorite.  It might help that I grew up in Virginia so it is close to home.

We really like GVA / Geneva too.  It is small so you don’t have to get there so early.  Its tiny size also makes it easy to pick guests up.  Plus, the city gives out a free 80 minute public transportation ticket to anyone flying into Geneva.

We just flew out of ATL / Atlanta International.  What a difference they have made – a shiny new terminal just for international flights.  The staff is friendly, lines short, and the food course is awesome.  Before this, I would have put ATL down below into the Worst Airports for International flights due to their old method of making you go back through security and take the train to baggage claim, even if it was your final destination.  This wasted on average 45 minutes to an hour for the international traveler.   Kudos for changing this, ATL.

Airports where we have been the most challenged:

HER / Crete – Heraklion – Check in is done by flight, not airline.   So each destination city has an individual desk.  You are not allowed to check-in until 2 hours before your flight, when the check in desk # is posted on the screen.   We arrived 3 hours early, so we had to sit in absolute hot & steamy Greek chaos to wait until we checked in and got into a mad rush of people all arriving at the same time – a line about 30 deep.    However, we ended up in the wrong line because we went for the line saying Geneva.  Who knew there could be another flight to Geneva 15 minutes later on a different airline?     We got to our plane just in time for our flight which is ridiculous for getting their so early.   Again, something solved by going to an airline desk vs. city desk.

GIG / Rio de Janeiro – again, you couldn’t check in until 2 hours before.  I don’t understand why these airports are so against people checking in early.    Our flight time was supposed to be 7:16am.   Upon arrival, the board said 7:53am.   Maybe its late??   The flight didn’t open for check in until 5:53am.  All which wasn’t clear at all, just a guessing game to just get in line.  Luckily it was the right line.   But after asking if we’d miss our connection with the flight time push back, the clerk said the flight time was 7:16am, not 7:53am, we’d be fine to make our connection.  But my boarding pass said 7:53am.  And they started boarding the domestic plane at 6:16am.  Bizarre.  And also weird that they only allowed for 23 minutes to get from the check in counter, through security and to the gate.

IST / Istanbul – you have to go through the full metal detectors and security check to even get to the check in desks.  So this security process is required twice for travelers flying.  One for people picking up people.   Awesome.  Love doing it twice.  Especially love the thrill of being late for an early a.m. flight not knowing this.

BKK / Bangkok – We had such a debacle with Bangkok Airlines when flying to Cambodia.  We showed up 2 hours early for a 7am flight but they said that they sold our seats because we were too late.  We got booted to the next one and missed our tour that day.  Note: never take Bangkok Air if you can help it!

LHR / London Heathrow – Every time we go through here, we have issues.  Either me with my visa or Gabe with his refusal to use a plastic bag or his iPad.  They are not fans of us.

FRA / Frankfort – It’s sheer size makes it hard to make connections.  An hour layover? Forget about it.  I got stuck in Europe after missing my plane with a full hour layover.  Not enough!  Also, wear your walking shoes if you are connecting in this monster!

JFK / New York– I had a 2.5 hour connection and barely made it….talking running.  They need to hire more immigration officers to help speed up the line.  I sat for over an hour in the immigration line.   The line for non US citizens was 10 times longer.  I don’t think those people had a prayer of making it out of the line that day.  Also, at JFK, you have to sometimes walk between terminals to get to connecting flights.  Make that RUN after you have spent over an hour in immigration….

Do you have any favorite or least favorite airports?

One thought on “Our thoughts on air travel”