We had to do some shopping for our upcoming Halloween festivities this weekend. Since groceries can be 1/2 to 1/3 the cost in nearby France, we decided to make a trip there to pick up the goods for the soiree.

Instead of picking a close border town, we chose to drive to Annecy, which is about 30 minutes from Geneva. Gabe had been to Lake Annecy before for work, but neither of us had been to the Annecy Old Town.

It was very charming. I loved the reflective colors in the canals that wove in and out of the charming French streets. I know my Mom will love this place when she comes to visit.

Our verdict on shopping in France is that it is really only worth it for large parties or stocking up on pantry goods. The Swiss are so strict on what goods you import, it took a lot of brain power when shopping to add up the weights to make sure we were under. In fact, I picked up a small frozen bag of veal meatballs and had to put them back because they were twice our limit.

We know not to push the limits. One of Gabe’s co-workers went to France to prepare for a big American style BBQ at her house. She bought 80 euros worth of meat there…a steal for a party….but ended up with 400 francs of importation fines. Ouch.

Check out Lady J’s blog more on shopping in France, including the limits.

I wish this lesson for you hadn’t come with a 150 franc fine for us (equivalent of $200 USD) but unfortunately there is no such thing as a second chance or a warning in the minds of the Switzerland train patrol.

We have frequently ridden RER, regional trains, as it is the most direct way to get to and from the airport. Swiss trains are immaculate, perfect, and once they have had a good life riding along on the pristine swiss railways, it becomes their turn to be set free in the pasture. With the pasture being the airport and RER routes that are 15 minutes tops, and don’t require a world-class choo-choo. 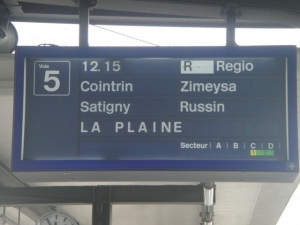 You can ride these RER trains for the same price as a TPG ticket, so 3 CHF, or for us, free since we have an annual abonnement for public transport. From the airport, its literally free to encourage tourism.

What we didn’t know was that these little regional trains actually have a designation of first and second class. We went for the short line when boarding the train back from Russin, but mistakenly entered the first class cabin. No clue. No less than 30 seconds after the train started, we were approached. No biggie, we were all covered by our TPG passes. Not so much. They pointed out we were in first class.

“Trop tard,” said the stone-faced police man. This is “too late” in French.

“Really? We didn’t know these had classes, we’ll happily move there,” pointing at the 2nd class cabin, literally through a few yards, through the first set of doors.

He sternly asked for all our identification and issued us 4 tickets. By the time he finished issuing them all, we were at our very short destination of the main train station.

So, a very expensive lesson learned this weekend and a big buzz kill to the wine festival.

What do you think…..did we get what we deserved….or would you have given us a second chance?

Reason # 1. Swiss wine is pretty good. And, you’ll have to come visit us to experience it. In keeping with Swiss tradition, they only like to consume their own agricultural goods. This is based on knowing their own are of higher quality (like everything Swiss) and more historically, on WW2 and the refusal to be dependent on anyone else for food. So, by the time they drink their own supply, only 1% is left for export.

Reason # 2. Doing independent wine tasting on your own requires a lot of work. Wineries are only open 10-noon on Saturdays. I have learned customer service and pleasing the public is not on their list of to-dos. So, you’d have to be well-planned to visit more than 2 in one weekend due to the short opening hours. Plus, I am sure you have to be fluent in French for it not to be awkward to show up at someone’s farmhouse ready to taste.

Reason # 3. Past Success. You might remember our first weekend we attended Caves Ouvert , where we met A & A and also D. We were delighted to go 2 for 2 with the A’s for Geneva wine festivals. They hosted an awesome pre-game brunch to lay good groundwork for the day. Sadly, D was not with us but we carried her around on a popsicle stick all day for photo ops. 2 out of 5 (the guys) thought this was creepy. But, all the girls enjoyed the humor in it and we made sure D on a stick had a good time.

Things we learned for next year:

–Don’t show up at noon for the Russin Wine Festival. Things don’t get started until about 2pm-3pm. We wondered around a ghost town Russin until about then.

–If you dress up in a Father Wine Suit, you are likely to have lots of pretty girls pose with you.

–The most important lesson comes tomorrow. Be sure to tune in.

In the meantime, for more facts on Swiss wine, check out Schwingen in Switzerland.

Happy Swiss Day, everyone!!! Just to give some perspective, the 1er août (said premiere-oot) is like the equivalent of the 4th of July for Switzerland. They decorate everything all over the city, and of course, everything shuts down in true Swiss holiday tradition.

They even changed the trash bags out in honor of la fête!

We wanted to get the hard-boiled eggs featured below to celebrate in style, but forgot to get them 3 days in advance before all the stores closed for normal Sunday and Holiday Monday.

Based on taking French from two Swiss-French teachers, I actually know some history on this holiday. My AIWC teacher, Esther, loves to teach us little things about history in basic French, which is really appreciated by all of us. So, here goes:

In 1291, in early August, there was no Switzerland. There were constant attacks of other countries wanting to conquer the areas which now are Switzerland. Three independent republics made a pact saying they’d protect each other, which formed the groundwork for the later development of the Confederation Helvetica, or CH.

Still today, all the cantons operate independently, with their own police, transportation, taxation and school systems. There are four different languages spoken in Switzerland, and the canton official language depends on your geography. This system allows different geographic regions to still exercise their historical preferences, but still be a part of the overall country of Switzerland.

Based on this date back in 1291, they have a fête on the 1st of August every year to celebrate this confederation of Switzerland.

We checked out the festival this evening in our city, Geneva, which has quite a big to-do. However, this type of festival takes place all over Geneva in all the little towns and villages. They say you can go out to the mountainside and it is quite a sight to see the bonfires in the distance. S taught me that the bonfires symbolize the communication the towns had with each other as that was their only method back in the day. Therefore, bonfires and lanterns are some of the characteristics of the 1er août fête.

Check out some of the scenes from the fête as well as a video of the huge bonfire in the park!