Prior to going to Amsterdam, all I knew about Heineken was from Gabe. I noticed at Montreux Jazz Fest that he had a certain scale on whether or not he would buy a Heineken or not. For instance, if it was 10 minutes to the next beer stand, either in distance or with time spent in line, he would go for the Heineken stand (as a sponsor, they were all over the place) versus what he really wanted. Then and only then. So, I supposed I had a slightly negative vibe.

We heard from friends that the Heineken Experience in Amsterdam was pretty cool. These friends know a lot about beer tours, so we figured a nod from them was a good reason to check it out.

Here is what I learned:

Heineken started as a family owned business. Leadership was passed from father to son, through the generations, and now a daughter runs the massive International company. Because it is a family name, they are very protective of the quality and have a laboratory to make sure that the beer tastes the same no matter where it is sold in the world, to protect the brand and their name. Pretty cool. 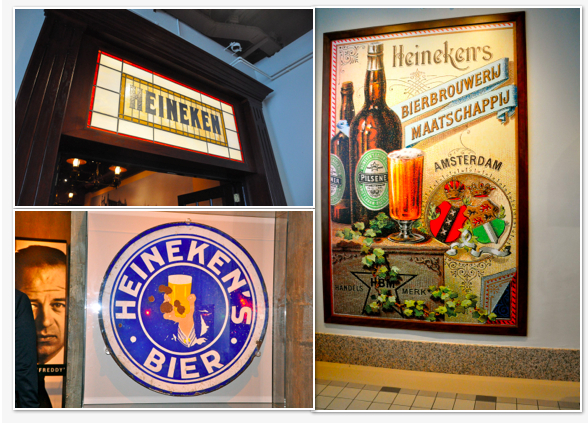 No matter how hard the Great Depression was, Heineken didn’t lay off a single employee. In fact, they were the only such company who gave pensions during that time. They really believed in their people and their propensity to make it a great company. Very admirable. 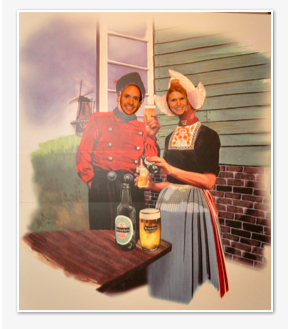 During the “experience”, they like to have fun. They let you touch the ingredients and do each step as it was done in “the old days”.

They have animals. Who doesn’t like animals on a tour? Kidding aside, we thought they ripped this off from Budweiser but learned that horse & carriage were the way that all beer was delivered in the olden day. They still keep these chaps around for parading the beer trucks through Amsterdam.

They give you lots of free tastes along the way. We learned how to do a proper beer tasting as well, similar to how you taste wine. The star shaped bar was pretty sweet. We were starting to grow in fan-ship at this point.

They also had tons of other interactive parts of the experience. We went into a 4-D room where we were a piece of barley made into beer. Gabe made fun of me when I put my camera away due to the sign warning it could get wet. But no joke, the floor dropped when we were “dropped” into the tank and the ceiling sprayed as well. We also experienced lots of breeze when we were “bottled”.

Other activities included games to fill a pint glass perfectly with the tap, a spot where you could make your own bottle with your name on it, and a place to do your own Heineken music video.

Another room contained screens playing movie clips for which Heineken had gotten product placement so you got to see James Bond, Brad Pitt, and John Travolta popping open a cold Heineken. It makes me wonder how much they paid for these

Next was a lounge area where you could lay in leather chaises and view all the old TV spots from the 50’s and 60’s. I like this one:

Finally, they gave you two free beers in the really animated World Bar, showing all over the world where Heineken was sold.

Gabe was reluctant to say whether he likes Heineken any better, but agreed that a Heineken in Amsterdam tasted better than any Heineken he had previously. However, I am now a super fan, mainly because I thought they did a brilliant branding job in the experience. It was definitely the best company tour I have ever done.

3 thoughts on “Heineken redeems itself”