This week, my gratitude post goes out to my French teacher at the women’s club. 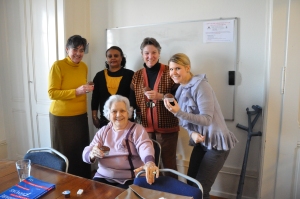 A few weeks ago, I was the only one to show up for Beginner’s French. I took advantage of the opportunity and asked my French teacher, E, if she would instead teach me about living through World War II. You see, E is in her upper 80’s. She was a teenager during the war and has made various references to her life during this time in French class. Even better, she used to be a history and geography teacher so she weaves in references which I happily soak up. She learned to speak English at the American Women’s Club (one of five languages she knows) so pays it forward by teaching French. In her upper 80’s. Wow.

So, as you can imagine, I was thrilled to get an hour with her to learn about this fascinating topic. Here is what I learned:

She was 15 when the war started.

Switzerland was never occupied during the war. However, all Swiss men served in the Swiss army. They were posted through various spots in case they were invaded to defend Switzerland. Her father was posted in the Jura mountains.

She said, “it was difficult to find professors (teachers) because they were all in the army.”

She remembers riding her bike and there were no cars ever on the roads, because the fuel was not available.

After the war, her father told her that her bicycle was given to her so that in the case of the resistance, he was going to summon them to his hidden camp in the Jura. She was to be the messenger on bike back to the village if needed.

She said Switzerland was safe because it was a huge advantage for the Italians and Germans to use the Swiss railroads. They wanted to keep them in order, to not be bombed. The railroads were Switzerland’s saving grace.

Every night she woke up to flights of the Allied. She said they went over Switzerland because there was nothing to fear in that air space.

She saw an air battle when she was playing with her friend in the mountains.

Prior to the conflict, the infamous Swiss Lavaux vineyards had employed French Savoy women to work. When the war started, they could no longer leave France to work in Switzerland as they were occupied and forbidden to cross the border. So the young Swiss girls and teenagers went every day of harvest to cut the grapes and fix the branches. They had no school during these times.

The boys went to the farms as they were stronger.

Her father had bought many acres of fruit trees – pear, apple and cherries. Her mother had hard work while her father was in the army – she made compotes, confitures (jams) with their harvests.

They grew potatoes to keep from being hungry. She told me “we had very little to eat but we were never starved.”

In fact, in the cities, like Geneva, every park was parted so that apartment dwellers could harvest potatoes, since they didn’t own land.

Because this area was French speaking Switzerland, they could take in French children for three months at a time to nourish them. They took a little boy, 5 years of age, from the South of France into their home. They dressed him in her old clothes. She smirked and reminisced that all her village people gave all the French children French-Swiss accents.

They were given cards to allocate how much sugar, milk they could buy so that the rich weren’t advantaged.

“I lived like a normal Swiss girl,” she said, “I had no problems.”

I find myself pretty lucky to have such an interesting lady as my French teacher. My grandparents were a bit older than E during the war, but I never had a chance to talk to them about their lives in that era. All of what I know was through a scrapbook my dear Aunt J made me of my paternal grandparents which detailed their lives including a sampling of letters from their WW2 romance. And I have a snapshot of my maternal grandfather in uniform. Talking to E about this time makes me feel like I know a bit more….and it turn, a bit closer to them.