I think I first heard about Christiania through one of Rick Steve’s videos.   This little area located in the Christianshavn area of Copenhagen is unlike anything else in the world.

Gabe at the entrance to Christiania

It is a freetown, an autonomous village that has its own laws and governance.  About 1000 adults, 200 kids and 200 dogs live there.   You freely pass through, as this is one of the only requirements that Denmark has for their continuance that it be a public place.

Rhubarbara Streisand at the entrance to Christiania

They only have a few laws:
-no stealing
-no violence
-no hard drugs
-no weapons

Also, if you walk down Pusher Street, they add a few:  no photos and no running.   Once you walk around and notice that everyone is in their own ‘state’, you understand how someone running would upset the mental order.

You might be asking yourself how this came about?   In 1971, squatters took over this area which was previously military.  Back then, the area was quite a seedy place and land values are low.

A view of Christiania residents enjoying the water from our canal tour the day prior.  I didn’t take a photo of the guy  sunbathing in the nude on the dock prior.

However, it has become quite controversial recently now that the area has become trendy and all the nearby buildings are being refurbished and sold for big buckaroos.   I heard its on the brink and that it would soon likely become extinct.  Thus, I really wanted to visit. 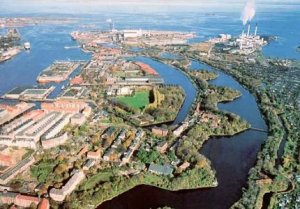 Christiania is located in the green area that forms the triangles.  Image courtesy of ehrasmussentrip.blogspot.com

This was an old boat house and now is condos, just opposite of Christiania. Image courtesy of arc house.

I was glad we checked it out.   It was interesting how the residents of Christiania have formed their own utopia.   However, it made me realize how important social norms are in establishing what feels like a utopia.   To these folks, this free society was heaven on earth.   For me, I was bothered by the trash and walking down Pusher Street so it was foreign to my concept of a home.

To each his own.