The day before our departure, I mentioned to some Geneva friends that we were going to be traveling to Istanbul for a quick weekend getaway.  J, my friend from South Africa, enthusiastically recommended the underground cisterns that are somewhat underneath or nearby Hagia Sophia.

The Basilica Cistern was built in the 6th Century during the reign of the Byzantine Emperor Justinian I, so it is the same age as Hagia Sophia.   It was originally under a Basilica that no longer stands. It is said that 7000 slaves worked to build the site.

The purpose was to provide water for the Great Palace.  It even continued to provide the water source for Topkapi Palace after the Ottaman takeover in 1453.

The ceiling is supported by 336 marble columns. Historians believe many are ‘recycled’ from older buildings all over the Ottoman Empire.   The water-tight wall is 4 meters / 13 feet wide.   The cistern was filled with water from Belgrade Forest and was transported via aqueducts.   It can store 100,000 tons of water! 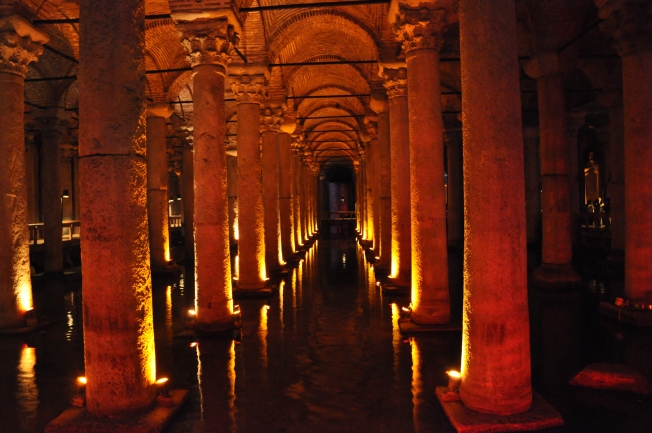 There was such a peaceful feeling in the cistern.   I delighted in the fact that there were huge fish still swimming around.   I also enjoyed the two mysterious Medusa head columns – one on its side and one upside down.

Gabe said it looked familiar when we walked through.   And, for good reason….this enchanting underground site was featured in James Bond From Russia with Love and The International.

There was not a lot about this site in our guidebooks, so I really appreciated the unique recommendation.