It appears that my blog post count is just “slightly” behind Lauren’s…. I suspect that may always be the case though.

Regardless, I thought I would give you a look inside my new office. The company that I work for is in the process of establishing it’s EMEA headquarters in Geneva. It currently has many offices spread through out Europe but over the course of this year will consolidate many of them into one Geneva office. This consolidation is what created the opportunity for Lauren and I to live in Geneva. The new office is largely empty at this point and I would put myself in the first third of people to begin working here. Thus, most of the desks around me are empty. That won’t be the case after the summer though. Several new employees move to Geneva every week so it won’t take long to fill it up. 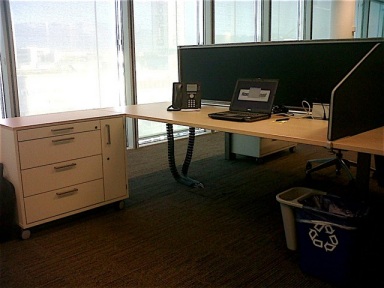 So as an American in Switzerland (Europe) here are my observations after two weeks of work:

1) Tram = Awesome – No more Atlanta traffic! All I do is walk a few blocks from our temp apartment. Get on the cool looking tram (see below). Then 25-30 mins later I am at work. It takes about the same amount of time is it would in a car but I just chill, read or use the time to catch up on emails. Brilliant.

1) Damn, the food is expensive – My average cafeteria lunch the first week cost around 13 Swiss Francs. ($15USD) I am little smarter and selective these days and can have a nice lunch for $9-$10 dollars. The $2 little cokes in the vending machine still get me every time though. (i need to kick that habit)

1) Energy Efficiency (Star Trek Style) – I knew before coming to Geneva that we Americans generally aren’t as conscious about the resources we use compared to many other parts of the world. (water, energy, etc) My new office is a perfect example of that…It doesn’t screw around when it comes to conservation. I am typically one of the first people into the office but luckily I don’t have to worry about turning on the lights. That’s because the building monitors movement in sections of every floor and then turns lights on or off based on activity. I feel like I am on Star Trek as I walk down the hallway to my desk and the lights turn on in anticipation of me walking into that area. Very cool.

1) Snow In June? – It got cold here on Tuesday and the Jura mountains near Geneva were topped with snow. Below is a picture of the snow on the mountain top I can see from my desk. 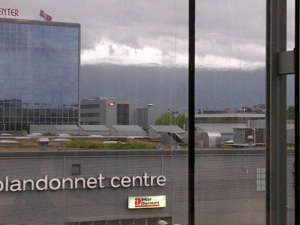 4 thoughts on “The Office”